The Humpty-Dumpty Principle in Definitions

In dealing with empty concepts, we came across the issue that if somebody uses a term that potentially has an unintelligible definition, they are likely to defend themselves by quickly making up some kind of definition.   I strongly suspect that in such cases, the usage of the term will be inconsistent with the definition.  Which brings us to Humpty-Dumpty.
Lewis Carroll (Rev. Charles Lutwidge Dodgson) is best known for his children's' books Alice's Adventures in Wonderland and Through the Looking Glass.  It is in the latter that Humpty Dumpty - an argumentative egg perched on a wall has the following exchange with Alice:
'And only one for birthday presents, you know. There's glory for you!'
`I don't know what you mean by "glory",' Alice said.
Humpty Dumpty smiled contemptuously. `Of course you don't -- till I tell you. I meant "there's a nice knock-down argument for you!"'
`But "glory" doesn't mean "a nice knock-down argument",' Alice objected.
`When I use a word,' Humpty Dumpty said, in rather a scornful tone, `it means just what I choose it to mean -- neither more nor less.'
`The question is,' said Alice, `whether you can make words mean so many different things.'
`The question is,' said Humpty Dumpty, `which is to be master -- that's all.'
What Humpty-Dumpty is saying is that he can stipulate what the definition of a term is.  Lewis Carroll was a processor of logic and mathematics at Oxford University (Christ Church College), and wrote extensively on logic.  He elaborated on the theme in Humpty Dumpty in Chapter 2 of Book 10 of his work Symbolic Logic, where he says:
"...I maintain that any writer of a book is fully authorized in attaching any meaning he likes to any word he intends to use.  If I find an author saying at the beginning of his book, 'Let it be understood that by the word white I shall always mean black' I meekly accept his ruling, however injudicious I may think it. "
[I quote from Lewis Carroll's Symbolic Logic by William Warren Bartley III,  ISBN 0-517-52383-3 - a book I had great difficulty in obtaining].
Carroll implies that an author must use such a term consistently - that is, without varying the underlying definition.  This appears to be the principle that Humpty Dumpty was getting at.  Varying the definition of a term within an argument is the fallacy of equivocation, but Carroll is going beyond that and demanding consistent usage throughout a universe of discourse.
A second point here is that if a term is to be used in a nonconventional way, then the definition should be explained up front.  Again, Carroll implies this in his example of white.  This is one place where I would agree with the maxim of "starting with definitions".  However, this maxim is often misused.  For instance, in analysis we nearly always aim to arrive at definitions, as we do not understand concepts at the outset.
Thus, I think we now have a reasonable framework for dealing with individuals who use terms that they cannot supply adequate definitions for, particularly in the context of empty concepts.
One quick Lewis Carroll story.  Carroll found it necessary to deny that he had ever presented Queen Victoria with a book.  The story circulated that the Queen has been so charmed by reading Alice in Wonderland that she expressed her desire to receive the author's next work - whereupon he sent her The Condensation of Determinants.
Posted by Malcolm Chisholm at 8:09 AM 20 comments:

What is an Empty Concept?

In the last post, univocal, equivocal, and analogous terms were discussed.  It occurred to me afterwards that all of these classes of term presuppose terms that signify concepts.  But what about a term that does not signify any concept?
At first this sounds a bit stupid.  Surely we would not waste our time on terms that do not signify a concept.  However, I have listened to several decades of marketing hype in Information Technology and I think that I have heard terms that do not signify anything - but which have some kind of emotive power.
I have tried to look for philosophical sources about terms that signify empty concepts, but have not been able to find any - probably due to the short time I have been able to invest in the search.  This makes me cautious, so I will confine the discussion of empty concepts mostly to data management.
First, if a term signifies a concept that can supposit for actual materially existing instances, then the concept is non-empty.  E.g. "Computer".  Unfortunately, in information management, we are mostly dealing with concepts who instances are immaterial, such as "Mortgage Backed Securities" (MBS's).  These exist, but not materially.  They are essentially contracts between human beings and/or institutions.   This way of thinking about empty concepts is now at a point where my metaphysics runs out.
Let's try another approach.  If a concept can be empty, that implies it can possibly have content.  What "content" has traditionally been taken to mean by logicians (in the context of concepts) is a definition.  Thus, I would suggest that an empty concept is one with either (a) no definition; or (b) an unintelligible definition.
And it gets more complex.   Someone who uses a term can generally attempt to provide a definition for it.  They are very unlikely to admit there is no definition.   The definition provided is likely either a definition for a concept signified by another term or terms; or the definition supplied is unintelligible.
Perhaps an unintelligible definition is more interesting.  Such a definition must fail significant quality checks,  Such checks may be those we formally use to assess all definitions, or may be checks based in the subject matter of what is being defined.  For instance, I suppose that "Platonic Forms" (which proposed real existence of concepts such as "table" or "chair") is a concept ultimately found to be unintelligible by philosophers.  More mundanely, I think "data owner" has an unintelligible definition insofar as it contains anything about "ownership".
This is yet another topic I will have to follow up.
Posted by Malcolm Chisholm at 4:24 PM No comments:

This is a topic which we will probably have to return to in the future, but a start has to be made.  Definitions are inextricably bound up with terms, and one classification of terms  divides them up into Univocal, Equivocal, and Analogous.  Let us briefly review these three classes.
It is not always easy to know if a univocal term really is univocal.  For instance, I am not aware of any equivocal use of "entomology".  There might be, but I am unaware of it if it exists.  Also, a univocal term might become equivocal in the future.
With respect to equivocal terms, a big problem is that there are far more concepts than there are terms to describe them.  This is a reason why equivocal terms come into being, and there seems to be no way to avoid it happening.  From a practical point of view the problems with equivocal terms arise when a term is being used equivocally in communication.  For instance, if I use "backup" within a group managing databases, everybody knows what I mean - even if " backup " has other meanings, such as in police operations.
One way round this is to maintain specialized vocabularies for "subject fields" (as the terminologists call them).  Roughly speaking this means that an equivocal term can be taken to be univocal in a specific context.  We will need to come back to this.
Analogous terms are more difficult.    Problems include: (a) only one of the related objects is identified; (b) the characteristics supposedly in common between the two objects are never identified.  This means that an analogous term may not actually signify a concept - it may be unintelligible and just used for emotive effect.  It certainly implies that there is a more complex relationship between analogous terms and definitions.  This too we will have to return to.
Posted by Malcolm Chisholm at 2:31 PM 36 comments:

If we look at a data model, is a definition of an entity type automatically produced by listing the attributes of the entity type?  If this were true then a data modeler would not need to produce entity definitions - he or she would simply need to identify and list a sufficient number of attributes.  I have actually heard data modelers being criticized by terminologists for doing just this.  The extent to which such criticism is fair or not is a separate discussion, but the question remains as to whether a list of attributes can suffice as a definition.
I do not think that a list of attributes is sufficient based on the recent discussions about concept systems in this blog.  No concept exists in isolation.  Every concept exists in some kind of concept system where it has relationships to other concepts.  At least some of these relationships and/or related concepts have to enter into a definition so that the concept being defined can be located properly in a concept system, which appears to be necessary for knowledge.
A list of attributes usually will not distinguish between those that are determining for the concept under consideration, and those which are not - some of which may be shared with other concepts.  Thus, just reviewing a list of attributes becomes a test of figuring out which ones are pertinent to a definition.  This surely defeats the practical aspects of definition.
It would seem therefore that something more than a list of attributes is required to produce a quality definition.  While many data modelers do produce quality definitions, it can be seen that the practice of data modeling may present the temptation to just assume that the definition of an entity type is provided by the attributes captured for it.  Of course, relationships and other concepts are present in a data model, but it will need another blog to answer the question of whether a data model has enough information to produce a definition based on entity types, attributes, and relationships alone.
Posted by Malcolm Chisholm at 11:06 AM No comments: 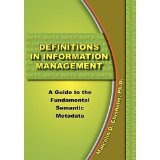